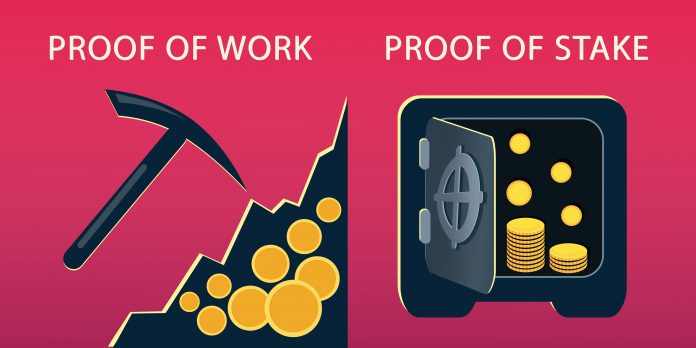 When reading about cryptocurrencies, you might encounter heated online debates about which is better: proof-of-stake (PoS) or proof-of-work (PoW). There are many arguments for and against each option, but what are they and what are their differences? In this article, we will try to answer this question so that you can make up your mind about this topic.

Proof-of-stake and proof-of-work, in a few words, are systems that secure online transactions. In a blockchain, users have to verify the validity of every transaction. These systems determine both who validates the transactions and what their reward will be. The criteria that they use in order to make these decisions, and the computing power needed are the main differences between them.

First, let’s talk a little bit about how today’s payment systems work and why the Bitcoin network, which aims to change everything, exists. Imagine the following scenario that will help as an example:

If Alice wants to send Bob $100, she has to entrust this to a payment system, which can be a bank, PayPal or other similar third party. Alice needs to put her $100 in the system, and then she instructs this system to credit this amount to Bob. He is then able to withdraw that money. In this case, the payment system needs to be trustworthy for people to use it.

In Bitcoin, miners are users that do the work that payment systems used to perform in the traditional asset transfer method. They devote their computing power to the entire network in order to solve a complex cryptographic problems which at the same time validate transactions. These problems require random testing in order to find their solution. Miners compete with very powerful computers in order to be the first to solve these problems. With the solution, the transaction gets verified and some amount is credited to the miner for his work. This transaction becomes a new block and the cycle starts again. The name proof-of-work comes from this work that miners have to do to generate more tokens.

The problem with this system is that with every new block, the problems get progressively more difficult, requiring more processing power and therefore energy. Many argue that this ever increasing energy consumption makes this system not feasible in the long run and bad for the planet.

In short, we can think of proof-of-work as a competition to solve complex mathematical problems. Whoever succeeds first wins and receives a reward.

Proof of Stake works differently from Proof of Work. Instead of using processing power as proof, transactions need other users to verify them. Verifying a transaction earns the user a small gee. The system decides which users will verify the transaction based on their “stake” on the currency. Verification privileges are awarded both on how many tokens someone owns and on how long they have held them. This means that the probability of getting verification fees increases when you hold more currency for longer.

The users that hold a larger stake of the cryptocurrency are the most interested in ensuring that the system works. This means that a secure system is possible without the need for huge computing power. This also means that the energy efficiency of a PoS system is much better than when using PoW.

New tokens are not created with this process, since the benefit verifiers get are fees on the transactions they verify, but these fees are very small and this system requires very

Currencies on Proof of Stake

Which method is safer?

It is essential to say that neither is necessarily safer than the other if everything works as it should. Both PoW and PoS have similar weaknesses. A PoW system is vulnerable to someone with access to more than 51% of the total computing power of the network. A PoS system could be tricked by someone owning more than 50% of the total currency in circulation.

Both systems work well, but most experts agree that PoS systems will have an advantage because of their energy efficiency. In the future, cryptocurrencies on the PoW system may be upgraded to PoS, but only time can tell.