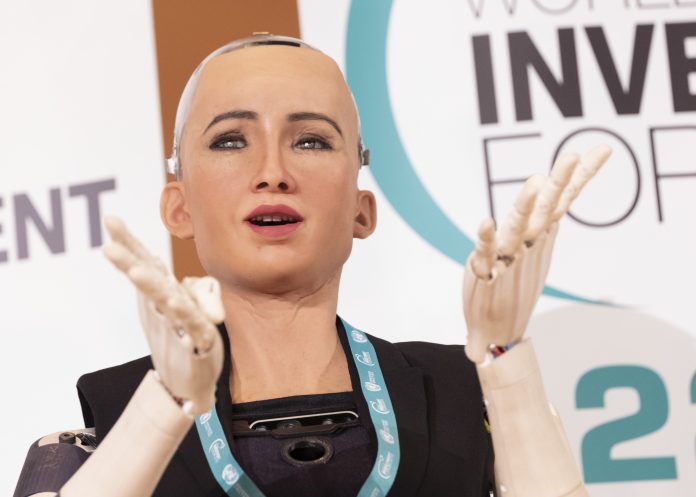 According to a recent sale of a specific token (NFT), this work of digital art was sold for almost $700,000, according to a Reuters report. But, why is this sale impressive? The drawing was created by the robot Sophia. And it is her face.

Sophia the robot: NFT with her face sold for high price

A humanoid robot named Sophia was activated in 2016 by the Hong Kong company Hanson Robotics. It debuted in the US later in March of that year and even acquired Hong Kong and Saudi Arabia citizenship. However, it is the only robot that has ever received the citizenship of any country.

Five years and hundreds of human-like experiences later, Sophia tries her luck at the NFT. It is a cryptographic representation of actual or intangible objects from crypto art, real estate, cards to almost anything that proves the ownership of the underlying objects to the holder of the token NFT.

NFT of her own face

The NFT was produced in collaboration with Italian artist Andrea Bonacet, with Sophia combining elements from Bonacet’s works, art history, and his physical drawings.

The digital work entitled “Sophia Instantiation” is a 12-second MP4 file that shows the development of Bonacet’s portrait in Sophia’s digital painting and is accompanied by a physical work of art painted by Sophia.

The piece went on sale yesterday, and an unknown buyer quickly bought it for $688,000.

“A hand and an arm packed with color and gesture,” said Sophia’s creator, David Hanson. “It’s 888’s choice of image meeting Sophia’s choice of image.” – said Hanson, founder of Hanson Robotics. However, Sophia has not yet commented on the matter.

Sophia the robot and a million dollars artwork

The portrait was created solely on Sophia’s own decisions, and there was no human intervention in the whole drawing. As such, the specific NFT was part of a more comprehensive selection of Sophia’s works of art for sale, which were sold in editions of 30, each for $2,500 or $3,000. The sales generated a total of more than $1 million.

Meanwhile, the sale of this NFT was the first to be done by a robot and which won suitors in a public auction. It was also one of the cheaper NFTs recently auctioned (the most expensive is the $69 million piece sold by digital artist “Beeple“).

To sum it up, robots are also trying their luck in the NFT field. Sophia the robot set the example. Apparently, the world is full of surprises.