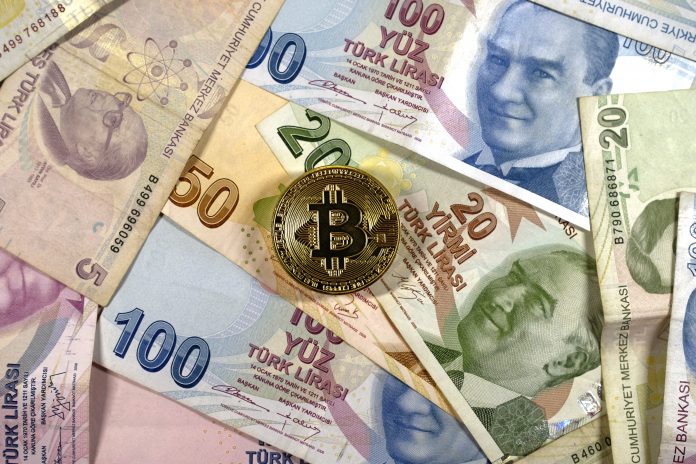 Bitcoin, the leading cryptocurrency, is sought five and a half times more in Turkey. This was because of a drop in the local currency, the Turkish lira. It lost 14% of its value after the central bank governor left unexpectedly.

Bitcoin during the rising inflation of the Turkish lira

Google’s search for Bitcoin in Turkey has exploded in the last 24 hours. This came after the Turkish lira’s value fell by 14% after the release of the central bank governor. According to data published on Google Trends, the number of Bitcoin searches increased by 566%. This in the hours immediately following the reports of the Turkish lira’s devaluation.

The governor was suddenly removed after the Turkish lira fell

According to the BBC, the sudden removal of the Turkish central bank’s governor shocked both domestic and foreign investors. Former Governor Nac Agbal has been credited with pulling the local currency out of historic lows. This by raising interest rates to fight inflation. In response to his appeal, the Turkish lira fell by more than 10%. At the same time, it managed to gain a fifth of its value against the dollar. This only from the beginning of 2021.

Behind the slump are concerns that the progress made by Naci Agbal may now be thwarted. This concern is underlined by the appointment of a new governor. Şahap Kavcıoğlu is a banker and politician who is opposed to using high-interest rates to fight inflation.

As already mentioned, the Turkish lira’s sudden devaluation led to a five fold increase of interest in BTC in Turkey. Bitcoin thus reaffirms its role as a global currency, offering a haven in times of rising inflation.

Bitcoin as an anti-inflationary asset

In 2020 and 2021, large companies began to invest in Bitcoin. This mainly for the high growth they expect from BTC. Also to its ability to hold value in the long run. In particular, the sharp rise in the number of dollars in circulation raises many concerns. Mainly about future devaluation and increases interest in anti-inflationary assets.

During Bitcoin’s 12-year history, there have been several inflationary crises in various countries around the world. It turned out that Bitcoin experienced increased interest in these places. The high premium at local exchange offices and stock exchanges was no exception.

We remember strong stories like the Venezuelan who used Bitcoin to pay for the birth of his son. BTC has served as a haven in Argentina, struggling with the currency crisis since 2002. In Turkey itself and traditionally popular gold, people have also used Bitcoin in the past. In 2020, inflation was of 10%.

Conclusion on Turkish lira and Bitcoin

After the fall of the Turkish lira, Bitcoin confirmed its role as anti-inflationary money/assets. Interest in it more than doubled in Turkey. This a few hours after the 14% drop in the local currency. Many investors are concerned about the consequences of the massive increase in the world’s most significant currencies in circulation. This may also be fueling increased interest in BTC.